What’s in a name, you say? We agree, a cake by any other name would taste just as good! Yet, almost every country in the world serves its own kind of cake for their own reasons and seasons. The history behind these different cakes are just as diverse as the many varieties and flavours that you can try!

Get ready for a fun history lesson about this dessert – we can guarantee that it’ll be a piece of cake! 😉

Mary I, Queen of Scotland didn’t like candied cherries in the traditional Christmas fruitcake, and so, she was presented with a special gift: the Dundee cake, decorated with concentric circles of almonds!

The traditional Dundee cake is generously infused with Scottish malt whisky to lift your spirits with its divine taste!

While cake experts place the origin of this dessert in Austria sometime around the 19th century, the Swiss Roll is definitely a part of many fond memories for many of us!

Also known as Roulade in French, a generous amount of jam, jelly or chocolate is spread over fluffy sponge cake and is then rolled over to form its characteristic spirals. 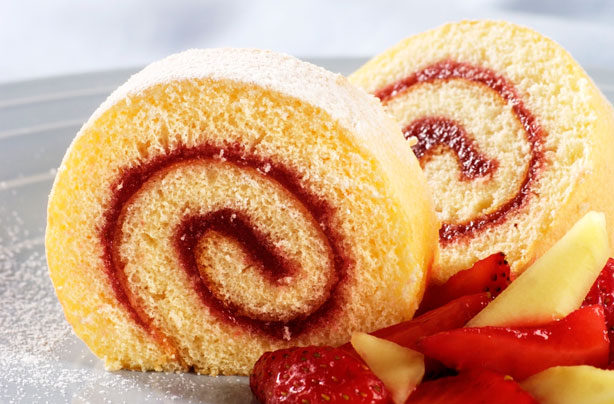 Picture from Good To Know

If these spongy pieces of heaven hold enough power to take the literary genius Proust down nostalgia lane, then we can only imagine what it would do to us mortals.

Lighter than sponge cake on the inside with a crispy exterior, Madeleines have a distinct clam shell-like appearance and makes for a perfect tea-time snack.

While its texture helps the cake trap the milk in the air bubbles, the evenly spread cream on top makes it even more delicious. Pure indulgence guaranteed!

Picture from A Treat’s Affair

First made in the early 1800s, the Angel Cake was named so because of its fluffy, almost angelic texture.

Regular sponge cakes are made with generous amounts of butter, but angel cakes (that look like donuts in a cake’s avatar) get their light texture since they’re made of egg whites. And the only rules about the toppings for this cake is there are NO rules!

Everything about the origin of Cassata is hotly debated by food experts, right from its name (Arabic for sloping bowl or Latin for cheese?) to the reason behind its flavour (the sweetness is often attributed to the Arabic influence in Sicily).

This Easter-time favourite comes in 2 varieties: the original sponge cake layered with ricotta cheese and candied fruits (also liqueur-infused in Italy) and the lesser-known version which contains layers of gelato, colloquially known as ice-cream cakes.

Few would forget the delight of biting into the alternating layers of chocolate sponge cake and whipped cream. Fewer would forget the cherry on top – love it or hate it, that’s the signature style of any Black Forest cake!

While assumed to be named after the Black Forest mountains in Germany, the cake is actually named after the infused cherry-distilled liquor, kirschwasser, that originates from the region.

Mooncake, the predecessor to Fortune Cookies, is the earliest known dish that contained hidden messages. Folk stories claim that Mooncakes helped in overthrowing the Mongolian rule in China!

With an egg yolk core (the reason why it’s called “moon” cake) surrounded by a sweet, dense filling & enveloped in either a chewy or tender pastry shell, Mooncakes are gifted to loved ones during the Lantern Festival. How many of these cakes have gotten you dreaming? Well, if you’re craving a slice like we are, order in from Swiggy now!